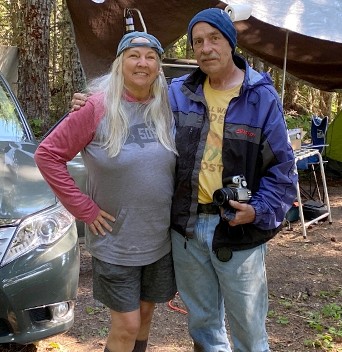 Rob and Susan (who enjoy their privacy to a degree) are the owners of Adventure Books of Seattle. Rob co-founded the company with Geoff Nelder in 2006. Robert is the author of several science fiction books and the pair are Event Organizers with SUFON - The Seattle UFO Network. You can reach their general email at adventurebooksofseattle@gmail.com Geoff Nelder is from Chester, England and was the managing editor for AB's Escape Velocity sci-fi magazine. Although the magazine is no longer being published, you can find the best of it in our book

Escape Velocity - The Anthology at Amazon.

Mr. Nelder is a Post-Graduate Fellow of the Royal Meteorological Society and the author of a reference book on the weather.

Although he is modest about it, Mr. Nelder is also a former computing teacher and the holder of several degrees. He also taught English for many years in the British public school system.

This officially makes Mr Nelder the smartest person on the staff. Phoebe Ezell coordinated our Young Writers' Outreach Project. This special program allowed book submissions by writers under the age of 18, under certain restrictions, and offers traditional mainstream publication from a young author. She now serves in an advisory capacity on book content for AB.

Ezell works for a Missouri school district teaching elementary grade levels. She is a graduate of the Tacoma Community College (with honors) and holds a Bachelor's degree in education from the Missouri State University. Greg the Techie Guy - Because he values his privacy, we refer to our IT advisor only by his first name, although he does allow us to use his full name in the copyright pages of AB books.

So...if you MUST know, just buy the right book.

Greg worked in program development and testing at the Microsoft main campus for many years, and is one heck of a nice guy. Today he works with and advises companies on working out the bugs in their interfaces and online systems. He can type code in several different languages at approximately 70 words a minute, which puts him right up there with Mr Nelder in the Brainiac department.